I’ve already posted a lot of pictures from our momentous show at the world famous Tipitina’s but a batch came in from photographer, Steve Hatley that merit a share! 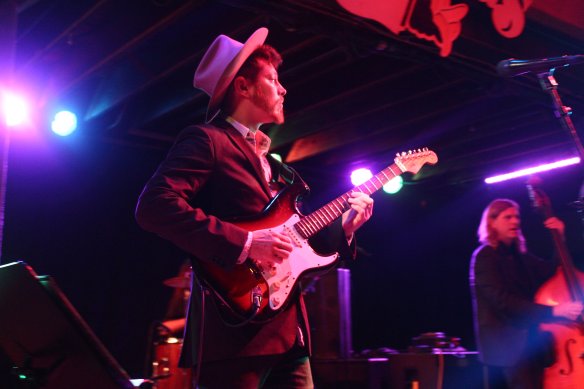 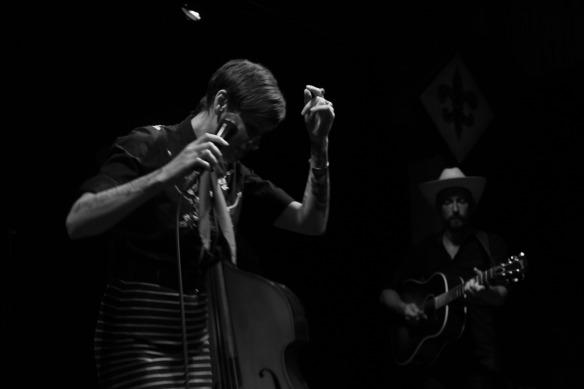 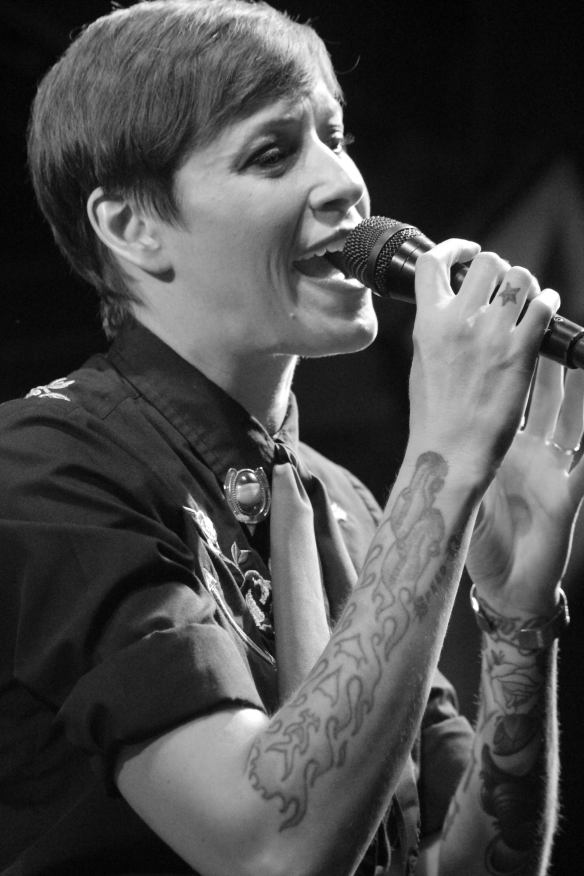 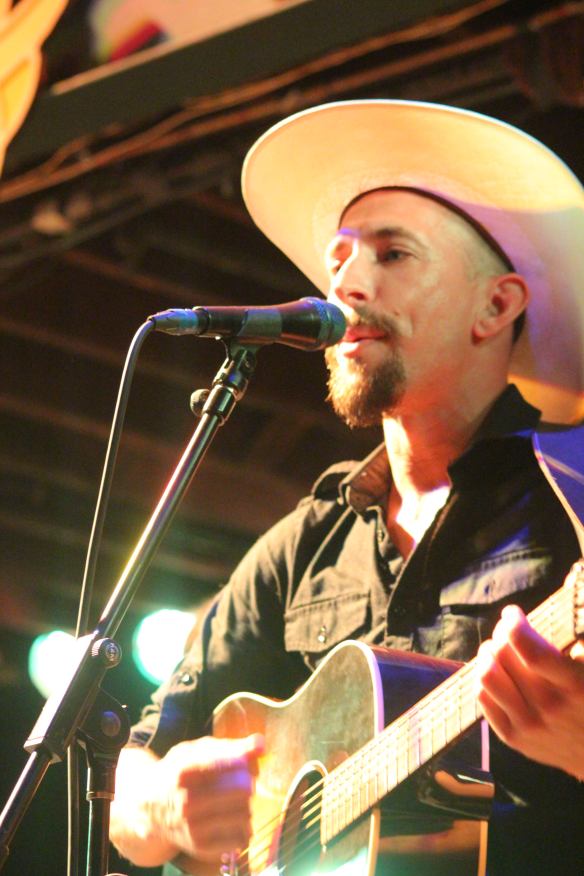 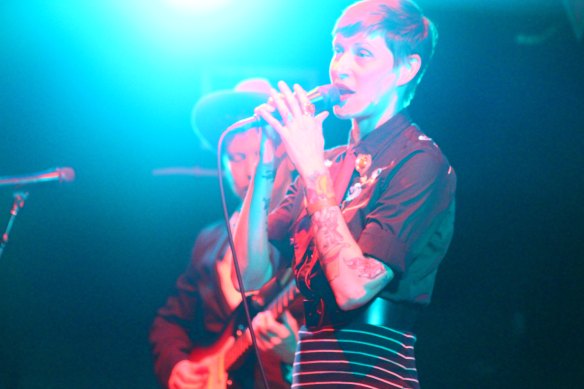 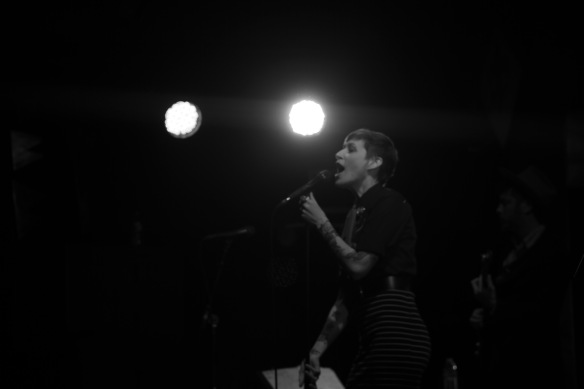 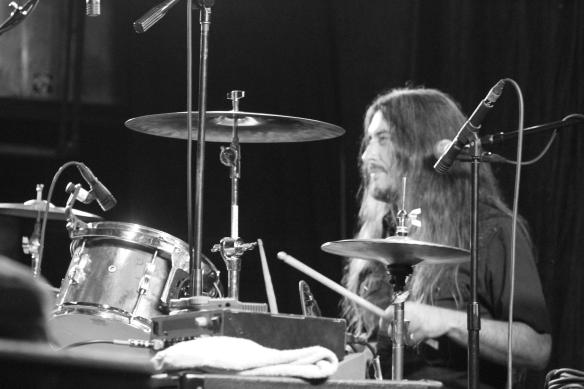 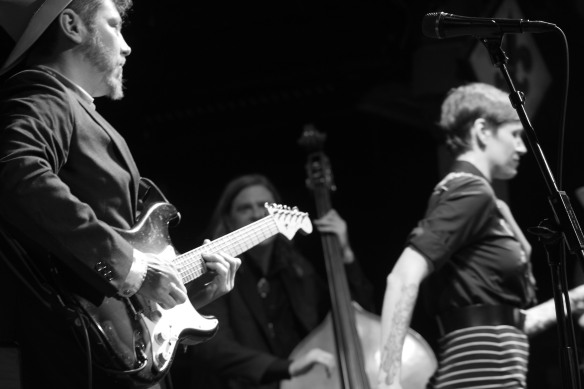 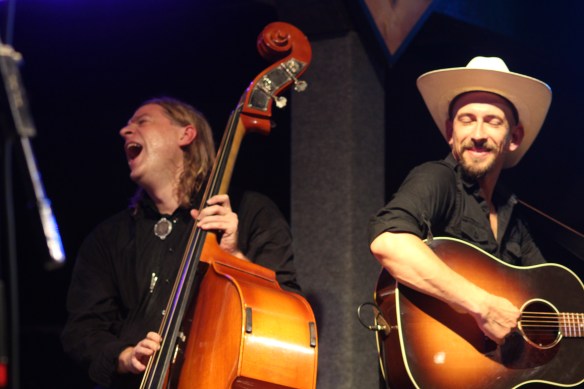 Andrew Evans blogs as Where’s Andrew? and is the Digital Nomad for National Geographic Traveler. He came to New Orleans, where we did a short interview which he combined with some live footage of us at Tipitina’s.  See my recommendations for where to eat and hear live music in the Crescent City!

Click the link. Go on. do it. New Orleans: Gal Holiday.

A handsome office assistant, the Fais Do Do, Tipitina’s and more! Brought to you by the magic of the “picture phone”… Click on photo #1 of Handsome Stan to scroll through the photos, read more in the descriptions and comment … Continue reading → 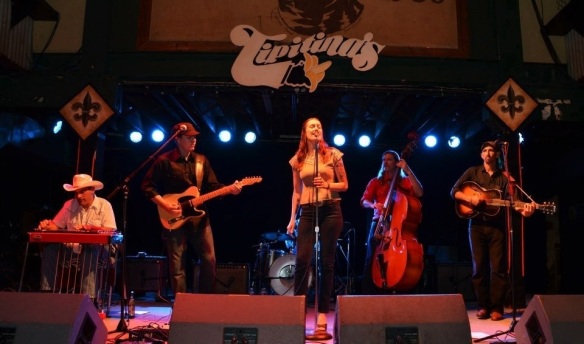 Hello from New Orleans! It’s been a crazy few weeks, starting off with a long drive from Los Angeles and a stop in Austin for a show with Charlie Pierce on piano at the historic Driskill Hotel. Dave and I then hot footed it to New Orleans, pulling into the city the day before Slobsterfest and our first Saturday night headlining show at Tipitina’s. You folks really came out in support and we thank you! Make sure to visit our website for photos, courtesy of Angelina Geraci and Jerry Moran as well as our new favorited videos on our YouTube page for videos taken by Angelina.

A couple days off to recoup and get organized turned into four days without power and two cancelled shows, all thanks to Hurricane Isaac. I for one, will never underestimate a Category 1 ever again. Fortunately, we had no major damage but our hearts go out to everyone in Mississippi, LaPlace, Slidell and way down in the parishes who got it bad.

After a week of sweating and worrying I was off to North Carolina and a show singing with the Squirrel Nut Zippers during the DNC! For those of you not familiar with the SNZ, check them out on YouTube. Here’s one of my favorites. They made a big splash in the 90’s by finding commercial success, helping to ignite the swing revival movement and were super influential on me as a burgeoning young big band singer. It was an exciting opportunity for me and one that I hope will be repeated in the months to come!

Now back on (semi) solid ground here in New Orleans, we’ve been catching up on booking and promoting our upcoming shows. I’m glad to say that we picked up a nice little show for this Saturday 9/15 at Mojitos on Frenchmen. Our fall schedule has beefed up for the rest of this month, October and November so make sure to go to our website and check out all the dates.

The Gal Holiday band is also coming back to Lafayette after too long! Then we’ll be in Gonzales for the Ascension Parish Balloon Festival and Texas the last week of the month, so look out for us in Austin and Plano folks. Traveling with us will be NOLA guitarists Chris Adkins and Gregory Good and we look forward to tearing down in the Lone Star State…and drinking a little Lone Star beer to boot.

See y’all out on the streets and in the clubs!

"Without the courage to fail there is no progress."

Some of our long time New Orleans fans might remember back more than a few years ago to a Gal Holiday show at d.b.a. when yours truly had a Jameson fueled microphone moment in which I tried to explain why we’re not a country band. As everyone now knows, the “establishment” has ceased categorizing bands like ours as Country and started using the broadly generic term Americana. While there are many groups, like online magazine Turnstyled, Junkpiled who continue to campaign for the return to proper classification in the genre, I fear that we will be lumped in with Folk music for many years to come.

Two events transpired which added to the steaming brew in my brain which so erupted as previously mentioned. The first of which was a phone conversation with one highly respected female manager, “Jane” who is the driving force behind her well known Louisiana musician husband. Jane mentioned that if we ever decided to submit our work to the Grammys, we would NOT fall under the Country category but rather submit as Americana/Folk. This was my first concrete assertion of something I had been suspect of for a while.

The second event that set the wheels of our new movement in motion was something funny that happened to Domenic, a fellow musician who at the time was our roommate when Dave B. had his recording studio in the French Quarter. Dom was looking for a dobro guitar in a catalog and having difficulty finding one. Maybe it’s listed in guitars? No. They’ve GOT to have one somewhere in here! Hmmmm. He flipped the pages and there it was, nestled amongst the mandolins and banjos under FOLK instruments. WELL.

*On a side note, I can certainly understand the dobro being classified as a folk instrument. Without going into a deep discussion of what Folk music specifically IS as well as its history, suffice it to say that I guess ALL instruments of the stringed variety are “folk” instruments. And all that said, Domenic’s music would most likely be considered “Folk Rock” or as he says, “Cosmic Rock’n’Roll for the Soul.”

We had a good laugh about it and the thoughts kept stewing in my noggin. And then Dom had a t-shirt made that gave a name to our new movement…F**k You, I’m Folk. That phrase hilariously sums up all the frustration and the resignation to what I find an interesting subject. Yes, we are most certainly Americana. But technically aren’t jazz, blues, zydeco and even rap? It just seems like such a BROAD generalization and the grouping with Folk seems a bit odd to me.

So why talk about this now, years later? I’ll tell you why gentle reader. Because recently, another incident came up that made me think about what the differences actually are. But first a little back story…

On our last trip to New Orleans this past fall, we introduced our new sound which we are calling, The Recessionaires featuring Dave B. driving the rhythm section with his slaps and popping of strings. Born out of necessity on the road during these tough economic times, we’ve stripped the band of drums for our smaller shows, a la Wayne Hancock who totally rocks this style. Our intention was not to change the sound of the band so drastically that our status as a “dance band” would be affected and so far we’ve gotten a positive response. In a look to the future with a simultaneous nod to the past, we’re taking things back to the real roots of the style with great songs and solid playing. It has been a highly rewarding decision all around in choosing to experiment with this new “drummed down” sound. Here’s a video of us debuting this sound at Mimi’s in the Marigny in New Orleans, taken by Andrew Evans, Nat Geo’s roving blogger.

A couple of weeks ago we showed up to a gig in California without drums and a comment was later made that we had scared the promoter half to death. He’d heard the band before WITH drums and thought we were going to “Folk Out” on his dance night. I wish I’d had Domenic’s t-shirt on that night!

After hearing a few songs he quickly felt relief and mentioned that he didn’t even miss the drums. Which is a comment we’ve been getting a lot. Nothing against you drummers out there, but y’all are LOUD. Which is why we’ll reserve our use of drums for festivals and larger rooms and stages like Rock ‘n’ Bowl and Tipitina’s in New Orleans. And because I truly do believe that we’re stuck being categorized where we are for quite some time, I will embrace it and proudly announce to world…F**k You, I’m Folk.