It’s Friday night and I’m sitting at home, keeping an eye on a sick kitty who is sleeping on the sofa next to me. The past few days have been spent catching up on things that fell through the cracks over the past week or so, mainly dishes and booking. No one in New Orleans functions “normally” during Mardi Gras, and unless you’ve been here to experience it firsthand there’s no way to relate it to anything else in terms of how much you have to rearrange your priorities. We had a great time this year though, even if it WAS more than a little weird to take a week off for SuperBowl. Below are a few pictures of our magical and foggy Mardi Gras, two I captured and one taken by our friend, Thaddeus who is the fella dressed as Star Trek crew with Dave in photo #1. Brian “Big Country” Ayres of our brother band, Country Fried and his lovely family are the subject of the third photo.

SO, now that we’re “back to normal” here in New Orleans let me just say “PHEW!” and reconnect on a couple of things. Firstly is the previously mentioned Kickstarter campaign, still in limbo for a new album we’re writing for. With festival season fast approaching we’ve decided to push our deadline back until June, which will allow more time to do everything we need to get done. Please look out for the announcement of the Kickstarter, which I should be able to make active by mid-March.

Also, some of you may be aware that I was invited to sing leads with the acclaimed band, Squirrel Nut Zippers, albeit on a very part time basis. I’ll be heading to South America (!) with them in a little over a week for a short, three day trip to Ecudor and Colombia. After only one show with their band last September it’s a little nerve wracking, but also quite an honor as I’ve been a huge fan since the mid-90’s. Wish me luck! I’ll take pictures…

Before I head down south though, there are a few more Gal Holiday shows here in Louisiana and I’m looking forward to playing again! We’ve definitely been playing less shows that we’re used to and I’m
getting antsy.

There’s only one chance to catch us this weekend and that’s Saturday 2/16 at our old haunt, The BMC or Balcony Music Club. If you’ve been seeing us for a while you might have come to one of our Sunday evening shows that we played there for two years. While this isn’t going to turn into a weekly show again, it IS still a great room and we hope you’ll join us if you’re in town.

Next week we’ll be back at Mimi’s in the Marigny on Thursday 2/21 with our quartet and then a return to Mid-City Lanes Rock ‘n’ Bowl on Friday 2/22. We’re FINALLY making a return to Baton Rouge on Saturday 2/23 for a show at the new, and apparently super cool new venue, Mud and Water in downtown. As always, check our website for more info!

And now that we’re done with “Super Gras” we move on to festival season. I’m proud to announce that we’ll be making appearances at both French Quarter Festival and JazzFest again this year! If you’re headed to New Orleans for the fests, we hope to see you.

“Without the courage to fail there is no progress.”

It’s Mardi Gras time in New Orleans. And yes, the Super Bowl has just landed here. Welcome to any of our fans who are visiting us this week. It’s a crazy world out there! This email will be brief and then I’ll let you get on with more important things…

Thanks to everyone who came out to our one and only show last week at Mojitos on Friday. Up until today the weather has been so lovely in New Orleans and it was truly a perfect night for a little courtyard concert. I was also reminded that it’s been a while since my last email, a couple of fans finding out about the show last minute. Please remember to check our website regularly for updates to the schedule. New stuff sneaks in all the time!

We’re getting in on the Super Bowl action this week and playing two shows on Friday at the Super Bowl Boulevard, staged on the riverfront at Woldenburg Park. There’s more info on the band line-up as well as a downloadable map HERE. This is a FREE event and New Orleans knows how to make a party, so join in the revelry!

Also this week is our return to the Rock ‘n’ Bowl TONIGHT (Wednesday) for swing night and on Thursday we strip it down for Mimi’s in the Marigny. Then it’s Mardi Gras week and three chances to see us, starting with a Tuesday night show with Jayson Wayne Knox at Siberia. We have an exciting show next Friday, February 8th at Chickie Wah Wah. We’re calling it “The Hillbilly Ball” and we’ve teamed up with our friends, The Haunted Hearts. They don’t have a website but you can read about their experience meeting Hunter S. Thomson at the Circle Bar by clicking that link. And check out the poster I “designed.” It’s no professional job but you get the idea.

And just a quick mention of a new, monthly show at Mojitos we’ll be doing called Second Saturdays which starts on February 9th and continues through the spring. Now you know where to find us every second Saturday! As always, please check out our website for more info on all the upcoming shows.

This is me, signing off. A Happy Mardi Gras to everyone. And Happy Super Bowl…may the best team win. Down here we’ll be wearing our Black & Gold, but secrectly I’ll be rooting for Baltimore. I am a Maryland girl, after all.Be safe, be smart but most of all…have fun!

“Without the courage to fail there is no progress.”

Just a couple quick snaps from my crazy weekend here in New Orleans! My band played Wednesday, Thursday and Saturday night our gig was actually on the parade route. Nutso.

I also attended the “Best of the Beat” Awards and had a blast singing with the fabulous New Orleans Nightingales. Every girl a gem…www.neworleansnightingales.com 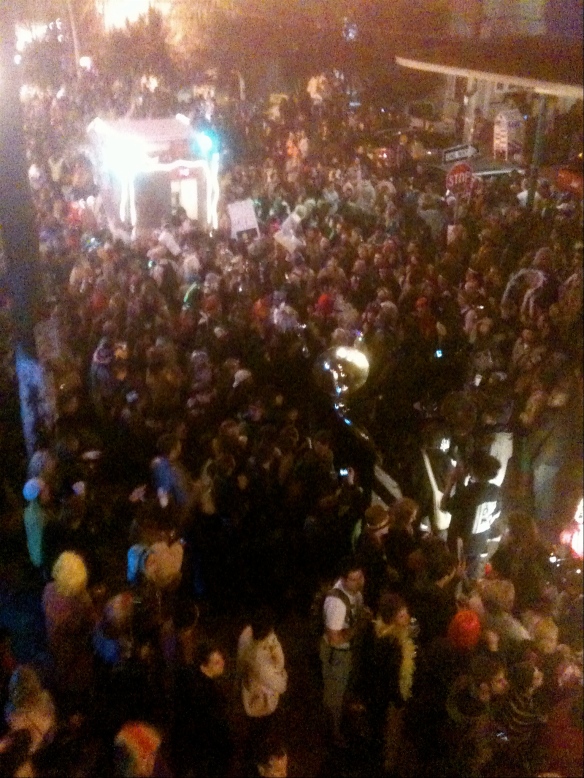 Krewe du Vieux parade is the most irreverent of the Mardi Gras parades, with revelers on foot rather than riding on floats, which in this parade are often pulled by mule or man.

Happy New Year! Welcome to the flip side.

Whether you glided smoothly like Grace Kelly or bumped and hobbled into 2013, time marches on and brings in a new year, full of possibilities. Personally, my 2012 was full of learning experiences and new relationships forged and fostered. I’m hoping that 2013 will bring more of the same as I continue to explore the music business and travel our country, meeting people and playing music that bring us together.

December found me unpacking and settling back into New Orleans life, with a sprinkling of live shows. Here in the Crescent City we’re gearing up for a busy start to the year with Twelfth Night and the official start to the Mardi Gras season a mere five days away! We’ll roll through Carnival season, hosting Super Bowl somewhere in the middle and come out on the other side in mid-February. New Orleans really knows how to throw a party and we’ll be playing around town the whole way through.

We have some great shows coming up including a couple family friendly ones and two new venues this month alone. Check out the schedule a little futher down in this message and please share the Facebook events. Speaking of Facebook, we’re almost to 3000 Likes on our page! In a lot of ways I don’t really know what that means, but hopefully it translates when we launch our upcoming crowd funding campaign. We have a bunch of new songs and want to get our third album out this spring so look for more news soon about how you can help us to get it done!

Your support is what keeps us going and we really appreciate all the love in 2012. Let’s roll this love fest over and make 2013 a spectacular year.

"Without the courage to fail there is no progress."
Please join and share the Facebook events to help us spread the word!