JazzFest started off with a bang last Thursday and just kept right on until yesterday. One day of rest today and then we get thrown back into it. There’s so much to write about and you folks who didn’t make it into town have been asking, so here goes my recap of Saturday and our performance.

Our set on the Gentilly Stage was an amazing experience. Dave and I had made a goal a few months back to do a mostly original set this year, which we met. Before leaving out from Los Angeles in late March we uploaded six new, original demos for free download on our website. Go get you some! Four of them made it into the line-up along with our originals on Set Two, one from our first release and some popular covers we play. Deciding to take a chance, we closed out the show with a cover of Pat Benetar’s song, Love is a Battlefield which the very talented guitar player, Chris Adkins did a killer arrangement of. We were asked to learn it for The Big Easy Awards and it was so much fun that we decided to add it in! Someone caught the last couple of minutes on camera, too which is super cool. Click here to view it! And here’s another video of our version of, Plastic Jesus.

Cryin’ Over You
Give Up Honky Tonkin’
Rainy Nights, Sunny Days
Not The One For You
Don’t Think Twice
The Long Black Ribbon
Louisiana Waltz
You Mean The World To Me
Send Me Away
Plastic Jesus
I’m Coming Home
Love Is A Battlefield

After out set was over I had a quick word with festival promoter, Quint Davis and then booked it to the CD tent for a signing. This is the first year I was asked to do one and I felt quite honored! Three sisters, all under 10 came with their mom toward the end and I have never been so entertained. They were all dressed in hot pink and chatted with me, telling jokes and generally cracking me up. What a time!

Then Dave picked me up and we went back to the Gentilly Stage where an air-conditioned trailer awaited. By this time the backstage area was starting to become a literal circus with the arrival of the New Orleans Bingo! Show. I got a cute snap of Dave with our good friend, cellist Helen Gillet and he took one of me with another friend, vocalist extraordinaire Debbie Davis. 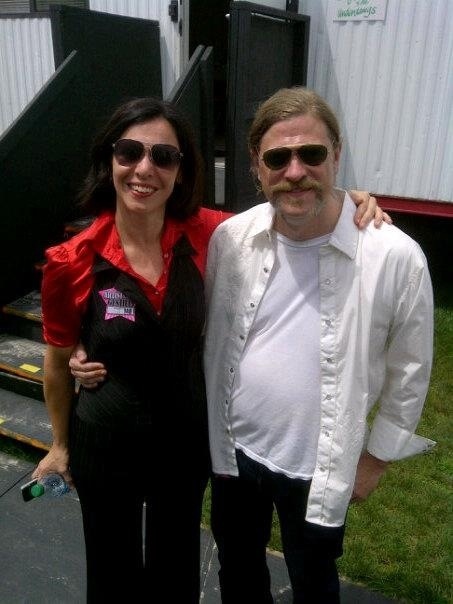 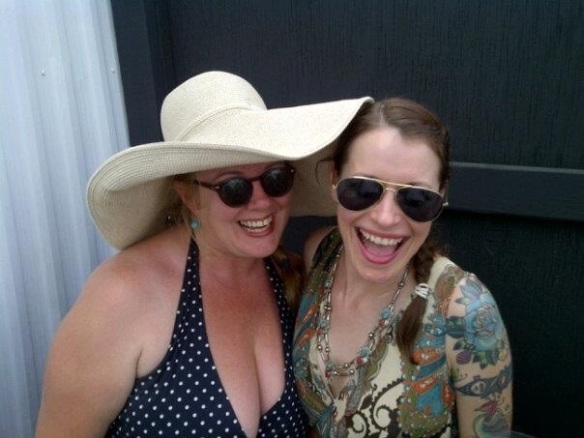 It’s a shame to go to JazzFest and not eat the food…and I’m not talking about the sandwich plate in the trailer. I dashed off to get some crawfish bread and a couple of beers while Amanda Shaw was setting up. The festival provides awesome viewing stands in the wings at the two biggest stages and we took full advantage while eating our snacks. We have two friends in the band, Tim Robertson (guitar) and Ronnie Falgout (bass) and the show was really great. I’ve been watching Amanda for years, as we all have in New Orleans and as she grows up (21!) she is really becoming one hell of a performer. She’s got the moves down and puts on a super show.

Having a four o’clock interview scheduled with WWOZ in the Hospitality Tent, I popped into the paddock and the Lagniappe Stage for a shady seat to watch Meschiya Lake and dem Little Big Horns. She is one of my favorite singers in New Orleans and has been picking up steam in NOLA and far beyond. If you like traditional style jazz singing you HAVE to check her out.

I also made sure to get to the Fais Do Do Stage to see the Carolina Chocolate Drops who I have loved ever since hearing a piece on NPR years ago. They are dedicated to creating fresh takes on African-American songs that helped to shape popular music in America. Y’all know how much I love the history of music, so of course I love their band! They are so terrific on stage; fiddle, banjo and guitar all singing and stomping. They added a cellist, too which I was happy to hear included on their album that I received as a birthday gift on Sunday.

The craziest thing about walking around JazzFest after our set this year was that I felt like somewhat of a rockstar, which is a new thing to me. I can’t tell you how many times during the day I was stopped to sign autographs, take photos or chat. It’s really amazing, totally humbling and we have you guys to thank for it. Lots of love to all our fans and here’s to JazzFest Week Two! 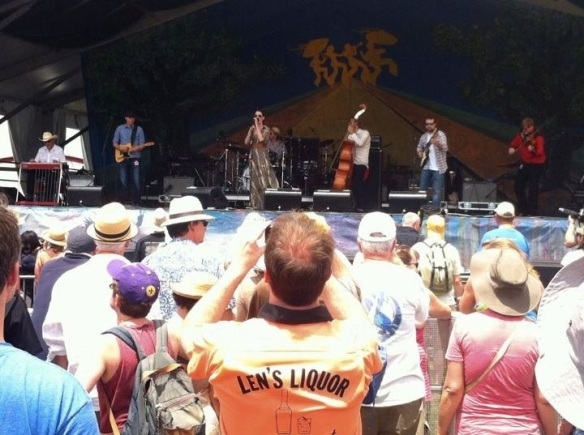 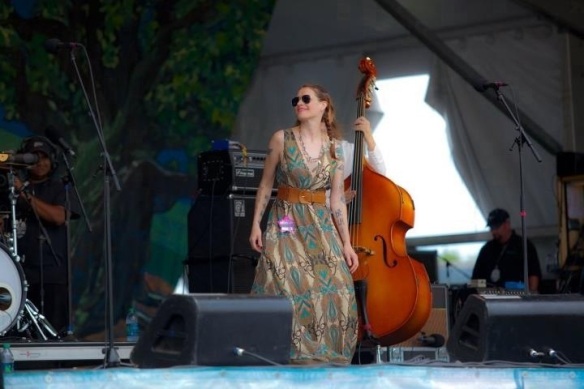